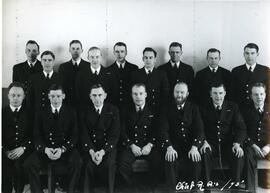 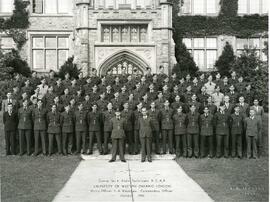 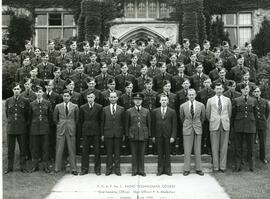 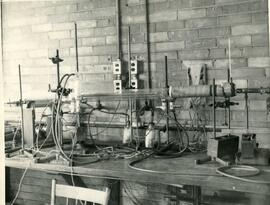 George Ross Love was born in Toronto in 1917 and died November 22, 2001. He attended Western University from 1937 to 1943 and graduated with a Masters in Physics. He then joined the Royal Canadian Navy from 1943-1945 and obtained the rank of Lieutenant in the Electrical Branch (Radar). Afterwards he returned to education, this time attending classes and working as a physics demonstrator at the University of Toronto from 1945 to 1948. He graduated in 1948 with his Ph. D. in Physics. It was at this time that Carleton hired him as an assistant professor in physics. In 1953 he was promoted to Associate Professor. Due to Carleton's move to the Rideau Campus and it massive restructuring he was appointed Director of Planning 1967-1973. In 1973 he became Carleton's first Vice President Academic and remained so until 1978. During his career Dr. Love has received several awards for his work. During his academic career he received scholarships for highest standing in his classes for the years 1937, 1938, 1940 and 1941. In 1999 he received the Founder's Award, Carleton's highest non-academic award. In the course of Dr. Love's career he has participated in various committees; the Building Advisory Committee, the Construction Co-ordination committee, the Design Review Committee, the Committee of Presidents of Ontario Universities (CPOU / COU), Architectural Program Committee, Engineering Faculty Board, Science Faculty Board, Senate Committee, Physical Department Council, Physical Department Executive Committee, Timetable and Scheduling Committee, Planning Officers of Ontario Universities, and various sub-committees.

Fonds consists of reports, statistics, maps, correspondence, newspaper clippings, hand written notes, a manual, course materials and committee minutes. All materials belong to Dr. Love and were used by him in his various activities within the University. There are five series which are entitled: space and building files, class materials and student records, miscellaneous files, registration files and union files.

No reproductions without written consent of University Archivist.